"In the hours between Day and Night"

This old school soul ballad is an intimate look into a relationship teetering on the edge and it’s our first acoustic release! Available worldwide on all platforms: http://hyperurl.co/InTheHoursBetween 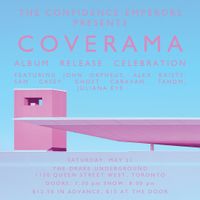 The COVERAMA album is being released worldwide on May 20, 2022. It is a multi-artist album of unique cover versions recorded by the Popguru roster.

The Popguru Revue is an immersive high-production live-stream concert series featuring performances from an array of the company’s diverse and dynamic artist roster. The Toronto-based record label, management company and music publisher, Popguru Sound & Vision, continues the concert series with a performance by Ghost Caravan, a group of collaborators lead by singer/actress Shaina Silver-Baird. On her debut album and various singles released since, Silver-Baird has collaborated with members of Martha and the Muffins, Grand Analog and the Weeknd. Silver-Baird says, “My music is about finding the light, the moment when you realize your own strength and ability to move forward. I want to be proud to share our songs with young women. There are so many voices in the world telling women how to think and feel about themselves. I want to be the voice that celebrates women. I want to empower and uplift people.” 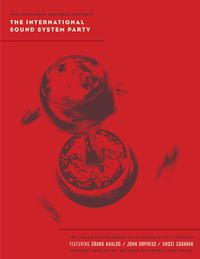 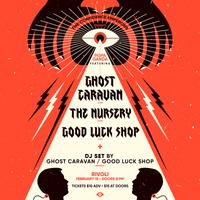 Attend an evening of POPAGANDA featuring the subversive electronic pop of Ghost Caravan, the Nursery and Good Luck Club at the Rivoli in Toronto on Friday, February 15th. Cure your Valentine’s Day hangover and meet your match with this hot-blooded line-up of Toronto bands. Tickets are $10 in advance and $15 at the door. 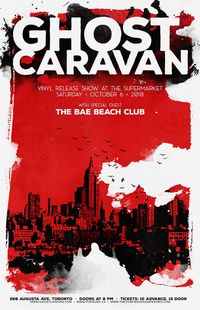 Come celebrate one of Canada's most vibrant indie film producers with some great music!

Ghost Caravan @ Taste of the Danforth

Free with entrance to Taste of the Danforth! Come see Ghost Caravan alongside a line up of up and coming artists handpicked by NXNE! 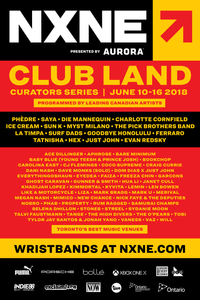 NXNE, presented by Aurora Cannabis, is bringing back the club-hopping wristband with a twist, offering festival-goers the chance to discover the hottest acts brewing in Canada’s music scene. Some of the best up-and-coming bands in the country have been hand picked by a dream team of Canada’s music leaders. 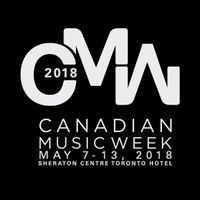 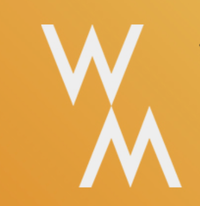 Catch Ghost Caravan at 10 pm. We'll be previewing the new EP in its entirety!

*Indie Week acknowledges the support from the following:

Indie Week would like to thank the Ontario Music Development Corporation for their support.

Kingdom of Birds “A remarkable band made up of remarkably young musicians” (Globe and Mail), Kingdom of Birds have been grabbing the attention of unsuspecting audiences, international music blogs, and well-known musicians alike. At an age when most kids are only becoming aware of popular music, Kingdom of Birds (ages 9-14) have recently released their third collection of original songs (this one recorded by Aaron Holmberg, formerly of the Tragically Hip’s Bathouse Studio). Their song "Ása Dreams of Broken Social Scene" was featured as a Spotify Fresh Find and has now been played more than 50,000 times. The band made its major festival debut at Field Trip this summer. Prior to that, KOB opened the 2016 edition of Sarah Harmer’s and Luther’s Wright’s annual holiday rock show, and guitarist/vocalist/principal songwriter Ása Berezny toured with the Hidden Cameras, a trip that included a stop at Massey Hall. The band will return to the studio to record a new batch of songs this summer.

Ghost Caravan Ghost Caravan, also known as Shaina Silver-Baird, combines elements of electronic, soul, and orchestral music to create her powerful, emotional songs. Featuring collaborations with members of Grand Analog, Martha & The Muffins and The Weeknd, the songs are both dark and uplifting - pairing intimate lyrics with grand, sweeping tracks.

RVNNERS RVNNERS is a four piece band set to release its debut EP of uplifting indie pop anthems. Their soaring music and introspective lyrics blends the dark intimacy of The 1975 with the emotional drive of Maroon 5. In their previous form as Tiny Danza they won Indie Week International based on the strength of their dynamic songwriting and engaging, high-energy live shows. After returning from their showcases in Europe they landed a record deal with Wax Records/Universal, a collaboration with prolific producer Jimmy Harry (P!nk, Madonna) and had their track Beat Fly featured on Xbox’s Rock Band video game.

Wild Planes Wild Planes is a fun high energy Pop/Rock band from New York City! Since their formation about a year ago, they have been able to play with Cee Lo Green, Def Leppard and other awesome headliners. Check out the boys at their Indie Week Concert!!

Palehock Palehock is an eclectic performer and DJ with a unique style and outgoing energy. Ranging from bass to house music along with cutting edge unheard music as well as originals. His live vocals and rapping over his own original productions with scratching and controller routines gets the crowd moving.